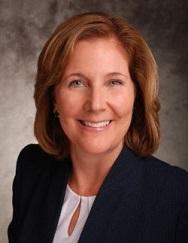 Anne E. McCaffrey is the President and CEO of Eastern Niagara Hospital in Lockport and was previously the 57th Mayor of the City of Lockport.

McCaffrey received a Bachelor of Arts Degree in Political Science with a Minor in French from Nazareth College of Rochester and went on to obtain a Master of Science Degree in Public Policy Analysis from the University of Rochester, with a concentration in health policy.

After graduate school, she worked for 20 years as an administrator at Lake Shore Behavioral Health (now BestSelf Behavioral Health), an outpatient mental health and substance abuse provider in Buffalo. She held several management positions. Her most significant accomplishment was leading the effort to secure funding for the construction and development of Harambee House - Buffalo’s first “Safe Haven” residence for 12 homeless individuals who are seriously mentally ill.

In 2014, she became the 57th Mayor of the City of Lockport. She fulfilled the unexpired term of the prior mayor who resigned mid-term. In 2015, she was elected to her own term as Mayor. She continued in this role until 2018, at which time she was named President and CEO of Eastern Niagara Hospital, where she had the opportunity to combine her civic leadership and health care experience.

While Mayor, she led a reform of the city’s ethics policies by developing and adopting a new Code of Ethics and appointing a new bi-partisan Ethics Board to ensure long-term ethics reform in the City of Lockport. When she began her term as Mayor, the City of Lockport was deemed a city in fiscal distress and was bordering on insolvency. After a year of restructuring city services and implementing a series of measures to increase revenue, the City emerged through the difficult period. Upon her departure, the City had accumulated a $4.4 million fund balance and had its bond ratings upgraded by both Moody’s and Standard and Poor’s. In addition to the adoption of a new Ethics Board, she established and appointed a new Audit Committee to ensure long-term fiscal stability and monitoring. While Mayor, she served on the Executive Committee of the New York State Conference of Mayors.

McCaffrey has since applied her turn-around management skills to Eastern Niagara Hospital. Similar to the City, she has led the hospital through financial challenges. Recently she entered into a collaboration with Catholic Health System of Buffalo, who has begun construction of a replacement hospital in Lockport. This collaboration will ensure long-term viability of hospital services for the community.

McCaffrey has served on several non-profit boards of directors and is a member of local service clubs including Rotary and Zonta. She has received numerous awards including: Elected Official of the Year from the WNY American Public Works Association, Woman in Public Service Award from YWCA of Niagara, Buffalo Business First - Power 100 Women, DeSales Catholic High School Distinguished Alumni Hall of Fame, and a Key to the City of Lockport.

She is married to Chris McCaffrey and they have three children.