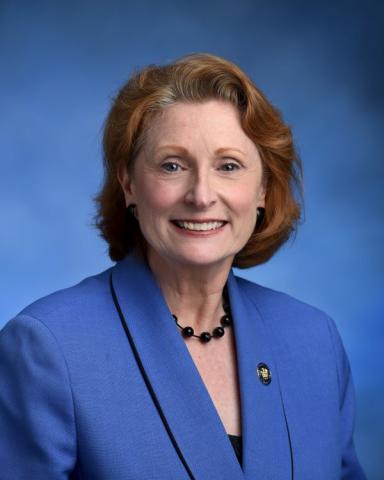 Jo Anne Simon was elected to represent the 52nd District of the New York State Assembly in 2014. She is the Chair of the Subcommittee on Workplace Safety. A lawyer and an activist, Jo Anne has earned a reputation as a tireless advocate and an effective community leader for Brooklyn. She has worked to give Brooklyn's communities a voice in the decisions that affect their lives, reduce firearm violence, promote environmental justice, fight sexual harassment, promote voting and campaign finance reform, enhance our transit system, and improve street safety and access to education for students with disabilities.

Jo Anne graduated from Iona College with a Bachelor's Degree in Communication Sciences, and Gallaudet University with a Master's Degree in Education of the Deaf. Before entering the law, she was a teacher of the deaf, a postsecondary disability services provider and was a certified sign language interpreter. She then earned her law degree at Fordham University School of Law.

After stints as a judicial law secretary and teaching in Hofstra University School of Law clinic program, she opened a disability civil rights law firm in Downtown Brooklyn and taught as an adjunct professor at Fordham Law School since 1998. Jo Anne is a nationally recognized expert in her field and her work has been featured in the New York and National Law Journals, among other publications.

Jo Anne tried the landmark case of Bartlett v. New York State Board of Law Examiners, and represents individuals with disabilities in connection with standardized testing. In Bartlett, a woman with dyslexia sought admission to the New York State bar. The Board of Law Examiners repeatedly denied her request for reasonable accommodations, asserting that she was not protected by the ADA because her having attained graduate degrees precluded her from being “substantially limited.”  Bartlett set the precedent in the Second Circuit for whether the use of “mitigating measures” removed a person from the ADA’s protections.  In July 2008, Ms. Simon testified before the U.S. Senate in support of the proposed amendments to the ADA, specifically addressing education and standardized testing issues and the use of mitigating measures. The final ADA Amendments Act affirmed the mitigating measures analysis of the Second Circuit in Bartlett. In 2012, she testified in support of California’s AB2122, which among other provision, prohibited “flagging” of scores for LSAT takers who received extended time accommodations.

Jo Anne has been active in many disability rights efforts and was a founding member of the Association on Higher Education and Disability (AHEAD) and the Reading Rights Coalition, which brought the issue of digital access to print materials to the forefront of many policy and technical discussions around the country.  She is a former chair of the Association of the Bar of the City of New York’s Committee on Legal Issues Affecting Individuals with Disabilities and was a long-time member of the New York State Bar Association’s Committee on Issues Affecting Individuals with disabilities, as well. She also served as president of Everyone Reading, f/k/a the International Dyslexia Association - New York Branch.

Since being elected to office, Jo Anne has been in the forefront of legislation to improve the lives and opportunities for individuals with disabilities, including a focus on dyslexia. She passed dyslexia legislation to ensure that more children with learning disabilities can learn to read and has instituted an annual Dyslexia Awareness Day at the Capitol in Albany which draws educators, parents and students from around the state to network and advocate for dyslexia legislation.

She currently sponsors legislation (a) to mandate universal screening for children to identify children at risk for dyslexia, (b) require that teacher education programs include instruction in dyslexia and equipping teachers to use structured multisensory direct instruction in reading, and (c) to establish screening for dyslexia at state correctional facilities for inmates who have not achieved a high school diploma.